Samuel Johnson has a big heart. This is something that anyone who has had anything to do with him learns pretty quickly. He’s a man who listens with his arms wide open. He talks like every man but with the style and passionate words of a poet. He’s an eloquent hippie and I like to think that he’s one of the crazy ones that Steve Jobs talked of. He’s here to make a difference. He’s here to bring change. A job his big heart propels him to do now more than ever since his sister Connie died of cancer in September. 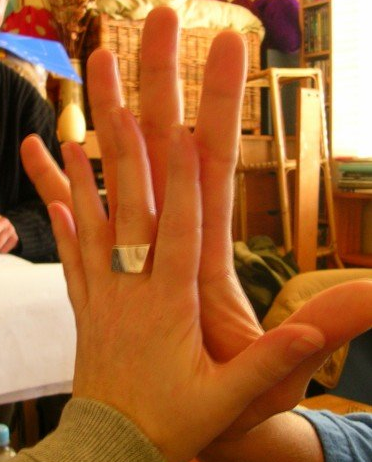 Sam’s hand next to mine. Told you..BIG HANDS

He also has very big hands. Which is a good thing because as the self appointed ‘head of vanquishment’ for cancer he’s got a big job ahead. He’s going to need all the BIG to get that job done.

I’m thrilled that his passion has been recognised by being awarded the Victorian of the Year, last night. (Although I do have a big girl crush on Magda, so a dual award would have been totes approps in my eyes!)

Reading the news of his recognition has reminded me of the first time I met Samuel and the impression he made on me.

A long time ago I was helping out on a student film. Someone, somewhere had passed my name around at the VCA (The Victorian College of the Arts) as a producer who could help. A producer who was working in the real world which meant I had experience and knew a thing or two about something or other. Truth-be-told I was just someone who knew someone that was asking around if anyone could help out some kids with no money on a film shoot. I could. And I did. It was also true that I was working for myself at the time producing corporate videos and making a living with my words. Well, not my words…but my ability to make the words of others not suck so much.

So, there I was, making 5-kilos of green chicken curry one night (as you do!) in readiness to feed a small film crew the next day.

The thing about VCA student films is that they encourage students to work in many of the roles that are required to make a film. So even if you want to be the camera guy (DOP) you probably have to help out your student buddy by being their sound guy on their film. So everyone has a first hand experience of each job on the set. Which is great in theory but even the best teams still need a leader, or a wrangler of sorts. Not the one calling the shots necessarily but a person who anyone can run to for a band aid or a debrief when stuff gets hard (and it always does when there’s no money and emotions run high). Somehow, in 2007, I got a reputation as being that person and ended up working on half a dozen films just because I wanted to help. I’m good with hosting, organising and helping. It’s what I like best. I’m also good with the band aid stuff.

Anyway, I turned up to this particular set early one day with my 5 kilos of chicken curry and set up a space in the tiny kitchen for everyone to use as their base (Unit). About an hour later the actor that the student director has convinced to star in his film arrives. Right on time (actually, early if memory serves). I go down to meet him in the street and he jumps out of the car with a small child, who’s about four or five and quickly asks, “He’s busting! Do you mind if we quickly use the toilet?” Naturally I say “Sure!” and usher them both upstairs not at all convinced that the toilet is accessible amid the film gear in this tiny apartment film set.

Once we’ve dealt with the small person toilet emergency and he’s been safely returned to his mother who’s been waiting in the idling car, our director goes about introducing our main man to the rest of the crew who are all pretty ensconced in whatever task they’ve been allocated for the day.

It’s then that I realize how tall this guy is and that he quickly fills any space he’s in and not just because we’re working in a tiny apartment in St Kilda. There’s something about this guy that fills a room more than his physical stature. It’s just him. He’s Atlas-esque. He could carry the world on his shoulders. The more I work with him (and learn about him in the years ahead) I realize that he has in fact carried a great weight and remained dignified and wonderfully flawed in his public life.

So we roll tape and the film day goes on. I run between the kitchen and the lounge room making sure everyone has what they need to do their job. During a break in filming I sit down next to our actor and we get chatting. Our conversation swings from his recent purchase of sex toys for his girlfriend to the suicide of on ex-girlfriend (a story he illustrates by flashing the tattoo of her name over his heart to me) and the fact that we share a love of Australian film-royalty Charles ‘Bud’ Tingwell (who told him never say No to anything, which is why he was working on this student film) and Melbourne maestro David Bridie, who is scoring the play he is currently in rehearsal for. He also tells me some out of school tales about his time on the last big TV show.

We go into great detail about some of these things when I have to shake my head to break the spell of our conversation. There’s work to be done and we’re yacking as if we’re in the local pub, beer in hand. “I’ve just opened right up to you haven’t I?” he laughs. Yeah, I think…knowing that I have a knack for that type of chat but also thinking this guy just has a way with people. He’s genuinely interested which makes people want to connect with him. He’s also incredibly flawed which makes him instantly relatable.

A few months after the shoot a CD of the soundtrack to the stage play “Weary” arrives in my letterbox. The original David Bridie score, with a huge note from Samuel scrawled in black texta telling me that he knew I’d love it and was sorry that it had taken him so long to get it to me. I had completely forgotten that during our chat on the couch in that tiny St Kilda apartment that he promised to send it to me. He signed it with a smiley face and reminded me about his mobile number.

Samuel Johnson is a solid human whose life path has, so far, been a rich and intricate tapestry of generosity, love and tears. He’s weathered a lot as we’ve come to learn with documentaries about his life and that of his sister, Connie. The Johnson family have let us all in to that tapestry in their quest to raise funds for cancer research; the disease which took Connie’s life on September 8…and my mother’s, my husband’s mother and a million other mothers, sisters, daughters et al around the globe every year.

Connie’s death had a big impact on me. I never met her. But I was in awe of how she died so publicly and how she shone a light in a dark place. 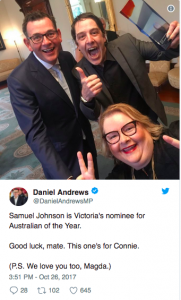 When she died I grieved for my mother all over again. As anyone who has lost their mother too soon will tell you, it’s a grief that is never far from the surface. And Connie’s death scratched mine. So when a friend of a friend called to ask if I could help out at Connie’s memorial  I didn’t hesitate. I’m was glad to be a small part of the village that those big hands have helped to build.

Congratulations Samuel, you eloquent hippie. You deserve the recognition. Here’s to the crazy ones. May your crazy change the world. x