I’m going to be a contestant on Millionaire Hot Seat tomorrow. This is how is happened.

When you’re in a funk, feeling down, depressed or otherwise just stuck in a state of complete and utter inertia I’ve been told that the best thing to do is…anything. Just do anything. One thing. Step outside. Write a letter. Walk to the shops and back. Open a bottle of red wine (der… as if anyone needs reminding to do that when you’re feeling blue!). Or, you can do what I did and audition to go on a national television show. Because when you’ve been in hiding for months why wouldn’t you want to re-enter the world for a close-up in front of a live studio audience?

I love a good pop quiz. My brain is full of facts and trivia that have no other place to hang out except with a pot and a parma at the pub on trivia night! If you want to know which James Bond film UK pop band Duran Duran got their name from; I’m your gal. If you’re curious about the difference between Brie and Camembert; I can enlighten you. If you’re wondering if 45 is a prime number…ummmm…maybe you should ask someone else (we all have our Achilles heel). 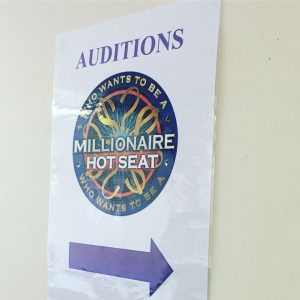 So one night in early February I was tooling around on the Internet, as you do when you’re lost in space and just peering into the filtered lives of the perfect, and I quite randomly found myself on the site for Millionaire Hot Seat. Before you could say “Lock it in Eddie” I had answered a few easy trivia questions, filled in my details and was waiting for the phone to ring to tell me I was only hair and make-up and a slick outfit away from winning a million dollars. Simples…

Ten days after I applied I was invited to audition. In a University lecture theatre, in the ‘burbs of Melbourne. With 45,000 other people…OK, so it was more like 300, but gee it felt like an MCG-full with the anticipation on Grand Final day. I found myself surrounded by a lot of retirees and a handful of students because who else has three hours in the middle of a weekday to play trivia? While waiting I listened into the excited chat around me. I was surprised to hear how long some people had waited to get a chance to audition. While everything happened relatively quickly for me, others had waited months, even years for their phone to ring. Not to mention that some eager trivia buffs had flown themselves to Melbourne for the audition – that’s right, just the audition – they hadn’t even scored themselves a seat on the show yet. I was a bit embarrassed at my nonchalant swagger up this path to the Uni theatre. Had I earned the right?

Having passed the sign in desk where I confirmed I was me and I was in the right place I took a seat in the theatre and all the memories of my own recalcitrant Uni days came flooding back. Smoked a lot of cigarettes, drank a lot of coffee, talked a lot of crap and proudly have two half finished degrees to show for it. I quietly hoped for a better outcome today.

While we waited for the rest of the theatre to fill we were kept entertained with a video montage of the Hot Seat Hall of Fame and blooper reel. Phew. I exhaled. Swearing and crying were clearly par for the course, even if it didn’t all make it onto the TV, I knew I’d be amongst friends. Thank fuck! 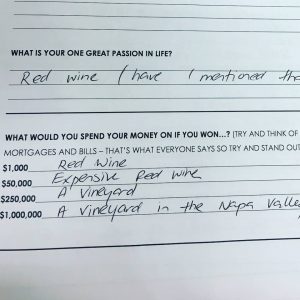 Don’t take it too seriously they said. Alrighty then! Exhibit A, your honour.

When we were all settled our host welcomed us and reminded us that this was a light entertainment show. He ordered us not to take it too seriously (I nudged the fellow next to me who had waited 18 months and flown from Hobart) and to enjoy the day.

There were two parts to the audition. 30 questions followed by a chat to camera about how brilliant you are. Two of my favourite topics: trivia and myself. I had this sucker nailed!

I scored 22 out of 30 on the trivia and only one of those, I’m proud to say, was due to peering ever so subtly over the shoulder of the dude in front of me. I mean, how was I supposed to know that a device used to measure and regulate the speed of an engine is called a governor?

The cut off to make the second round on this day was 18 so I was through to the chat to camera bit. It was then that I realised that I was going to have to sit through 50 other people’s chat to camera too and that this was going to get … ummm…boring. So, like the girly swat that I was (and wanting to leave sooner rather than later) I shot my hand up and offered to go first. I had to talk for 60 seconds about myself and make it sound fascinating but not too brilliant because it’s light entertainment…not the Oscars. I talked about how my mid life crisis had lead me to the audition and how we had a party for my dying mother instead of a funeral and how I was once a psych patient with Geoffrey Rush. All of that must have worked because less than two weeks later I got an email inviting me to be a contestant with 35 others. I guess they know real genius when they see it… 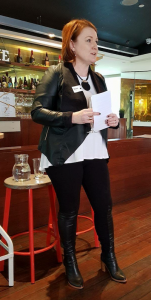 Me in my standard Melbourne uniform of black with a splash of colour. White is a colour, right?

They record six shows in a day and you have to turn up in full makeup and hair at 8am ready to shine. The only hiccup I could see was the wardrobe requirements. “Be colourful!!” said the info sheet, with two exclamation points. “Multi-coloured/patterned clothes are best. Bright and cheery outfits look fantastic on camera. Solid colours can blend into the set & leave you as a floating head.” The rules went on to forbid “black tops & jackets” and “white tops & jackets”. With my Melbourne wardrobe of Black on Black with a splash of white I was officially screwed…and immediately rang a stylist friend (and I’ll save that panicked experience for another post).

All up there were 11 pages of information, rules and guidelines and when we can expect our million dollars. Quite honestly all I need to know is which is my best side for the close-ups of me and the super-sized cheque!! (two exclamation marks intentional).

Lock it in Eddie. I’m ready for my close up.

Because I’m super helpful and I know you’re super curious…here’s a link that tells you how you can apply to be on a bunch of popular TV game shows.