I went out to lunch yesterday with a group of my girlfriends. We’ve known each other for close to 20 years and we make an effort to do ladies lunch once or twice a year so we can catch up away from Facebook statuses and generally talk shit.

And yesterday along with a few bottles of Pinot Grigio we talked a lot of shit and discovered that we all have the same amount of shit and pile it up in roughly the same place in our homes. In a place we dubbed the ‘shit bowl’.

The ‘shit bowl’ is the dumping ground where everything life admin goes to get lost. And we all have that place. You probably have that place. Thanks to a recent house move my shit bowl is actually a shit station gloriously spread over an entire kitchen bench. It irks me every time I look at it because I’m an everything-in-its-place kinda gal.

Here’s a photo of my current shit station. 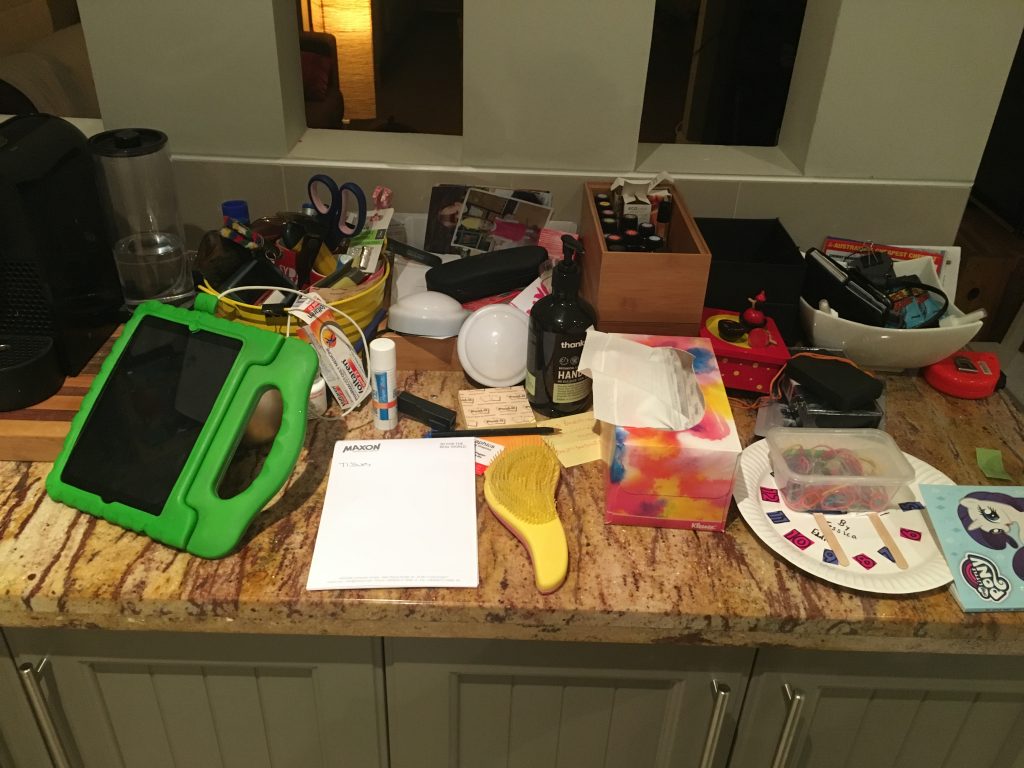 In my defence this magnificent installation is due to the house move because I haven’t got around to Kikki K-ing the shit out of my home organisation yet. But make no mistake. I will have a shit station. Every house needs one. When we moved into this house and decided where everything would go I knew immediately what this small bench would be used for. Dumping shit. In no particularly order, here are the things currently dumped:

My daughter’s hairbrush and a box of hair ties. Given that she can be rambling about the house anywhere but where I need her to be when I’m trying to make her Kindy-ready leaving her box of hair stuff here seems to make sense for now.

An empty box of Volatren. Reminding me that it’s empty and I need to buy more. Because dumping it there is much easier than actually writing it on the shopping list which is just underneath it.

The shopping list. Which currently has only one thing on it. Tissues. Because in the house of a pre-schooler you’re always wiping noses (mostly your own)

Pens. Definitely need more than one along with a handful that don’t work anymore (mandatory).

Flower shears. Because the maid* needs these things at the ready to trim my roses.

Scissors and a glue stick. For my four year old to discover at will and destroy the joint. Before sticking it back together.

Two night-lights. Waiting for batteries to be replaced.

Batteries. In the bottom of the yellow tub that are waiting to be a) thrown out because they’re dead or b) put into the night-lights.

Hand cream. Must have one in every room of the house. Because lady.

A souvenir cowbell I bought in Lauterbrunnen, Switzerland in 2004. It definitely belongs elsewhere and I have no idea why it’s there. I didn’t even notice it until I was doing an inventory for this post!

My essential oils kit. Which I’m bad at using but love having. I know it’s meant to replace every cleaning, healing and drinking product I own but for now I just diffuse it.

A broken wind up toy. Waiting for my glue gun to fix. Or for me to throw out. Which ever comes first.

A tape measure. Because, despite rarely needing it, it’s easier to leave it there than put it in the hall cupboard with the rest of the hardware type items. The hall cupboard is 3 steps away from this photo.

My Little Pony chapter book. Was read for a few nights about two weeks ago. Hasn’t made its way back to a bookshelf yet.

His coin bowl, which is a shit bowl within a shit bowl. He’s got retro chewing gum cards in there, a hard drive or two, business cards, old wrist bands, keys, prescriptions and probably some coins …at the bottom.

And the two gadgets that get the most use
Our Nespresso machine. Giver of life and…

My daughter’s iPad and charger. Also giver of life, my life. She uses it so I may enjoy mine!

As we emptied our wine glasses over lunch we reflected on those that can afford to build actual nooks for the shit bowls! Apparently if you have enough money you can build small rooms off your kitchen to store your crap and hide it away from sight. Which just goes to show that, despite those Instagram filters showing the perfect life, even the wealthy have shit. They just hide it better than the rest of us.

As a special bonus, while talking shit, I was also introduced to the very shit Instagram account of Shit Adelaide and have been laughing ever since. As an Adelaide girl I found it hilarious and true. Go on…check it out.

*I don’t have a maid…or roses for that matter.

2 thoughts on “Can We Talk Shit For a Moment?”