Today is my mother’s birthday. She would have been 73 if cancer hadn’t taken her from us just over 13 years ago. Fuck cancer. 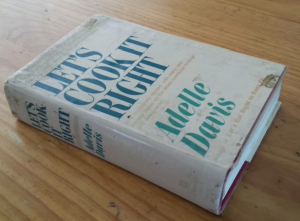 My mother was a fearless health food trailblazer. She was “cooking it right” with Adelle Davis in the 70s. Davis was one of the original nutritionists, before nutrition was trendy. My mother’s cookbook collection consisted of all manner of healthy living guides. Julie Stafford’s Taste of Life series in the 80s and Sandra Cabot’s The Liver Cleansing diet is one she added in the 90s. A book and diet that became hugely popular in the decade I entered my 20s. 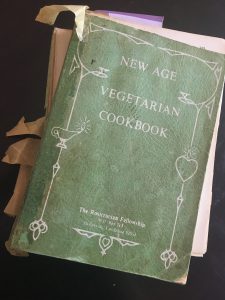 It seemed my Mum’s way of living was finally catching on…twenty years later.

In the 70s and 80s she’d have juice fasts, meditate and go on health retreats. She practiced yoga and encouraged my sister and I to try everything she cooked. As a result I was exposed to all sorts of weird and wonderful food from a very young age.

We always had tahini in the fridge and Mum would make her own hummus, her own yoghurt and served us something called Tamale Pie with nutmeat (which I hated as a kid but is now one of my favourite recipes, probably because it reminds me of her).

She made breakfast porridge from something called millet. I pretended to despise it, but it was sweetened with honey and actually pretty good. 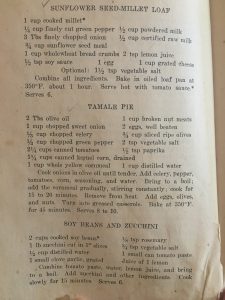 She’d make muesli cookies and sugar-free shortbread.  Avocado was a frequent starter to our meals (this was the 70s when avocados were mildly trendy but quite expensive) and my sister and I were eating artichokes with aioli dipping sauce before I could even write my own name.

We’d be packed off to school with alfalfa sprouts in our brown bread sandwiches and at least once a month went with her to the bulk health foods store to load up on grains and legumes and honey from a barrel and peanut butter from a big self-serve tub.

As I write this I can still smell that bulk health food store. A heady mix of carob (which I still can’t stand) and spices…a truly bizarre but oddly comforting smell. We’d always get some small ‘treat’ too which wasn’t exactly a 20 cent packet of mixed lollies. More likely a boiled sweet of some sugar free description. This was in a time before there were packets of almond meal on your supermarket shelves, before hummus was available in more than a dozen different ways and before lentils were considered mainstream fare. 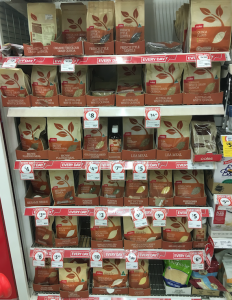 Yes. My mother was a trailblazer. Of course I didn’t appreciate it then. I was a kid. I wanted to be like every other kid at school, ordering the processed crap from the school canteen and washing it down with some sugar-high inducing coloured milk.

It didn’t help when the adults of my youth didn’t quite appreciate my mother’s nutritional standards either. I vividly recall a day in kindergarten when one of the teachers grimaced as she took my sultana stuffed granny smith apple from me, saying she’d take the core out because it looked rotten. Not rotten. Just creative use of sultana stuffing lady! I wasn’t yet 5 years old.

As I’ve made my way through life and developed my own likes and dislikes and become responsible for not only my own nutrition but that of my 3 year old (not to mention the man-child I married) I find myself returning to the foundations that my mother established. I don’t shy away from trying new things. I’m not overwhelmed when recipes call for seemingly strange and odd ingredients. Thanks to my mother, my formative years have made me curious at the very least. Sure, I don’t live a puritan lifestyle and there’s no way I could be vegan but I understand the benefits and make choices based on what my mother taught me.

(Incidentally she also taught me how to drink red wine, but that’s a whole other story.)

Me & Mum. Adelaide. 1995. When I took my fashion cues from every episode of Friends.

As I write this on her 73rd birthday I’m reflecting on the role that her nutritional choices have played throughout my whole life. It’s because of her, that I find myself quite at home with ingredients in modern recipes that are more common place these days…the tahini, the chia seeds, the buckwheat flour, the almond meal and the psyllium husks. Even though they hadn’t been part of my life for a while, they aren’t foreign either.

So if you’re struggling to embrace a new nutrition plan or are worried that your kids won’t eat what you cook, my advice is just give it all a go. Show them the way. You just never know how deep your influence will go. By introducing positive food choices and trying new ingredients you’re setting the tone for the rest of their lives…even if they can’t appreciate it now.

Maybe it will all fall into place decades later when they start to make better food choices for themselves.

3 thoughts on “My Mother’s Kitchen”