“Comparison is the thief of joy”, or so the saying goes. 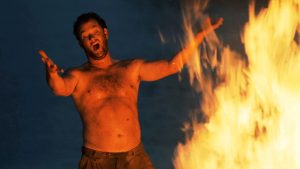 I can’t tell you how many years I’ve wasted comparing myself to the lives and bodies of others. And finally…finally at 45 I’ve managed to light a fire that I am proud to call my own. Lately, I feel like Tom fucking Hanks in Castaway when he beats his chest having created the fire he needs to survive alone on an island; “Look what I have done!”

Like many women I am prone to insecurities, feeling unnecessarily vulnerable and allowing the opinion of others to get in my way of achieving what my heart truly wants. And because of all the wasted years comparing myself to others to figure out what it is that I want, I’ve got a truck load of weight bearing down on my heart …which makes it really hard to actually know what my own opinions are at times. Surprising I know, given I’ve been writing a blog for a year which is pretty much all about my opinions.

Earlier this year I decided I needed to fix my wardrobe situation. And by “situation” I of course meant “I have nothing to wear and feel like crap”. So off I went to a two-day styling workshop that promised to help me to “get me and my truth out there confidently, so I can make a difference in the world”. You can read my original post here. I had planned to write a follow up post on what I assumed would be a brilliant and uplifting experience. Instead I finished those two days $1,500 poorer and felt silly that I just didn’t get it. So I fell into a hole and stayed silent because quite frankly, I had nothing nice to say.

It’s taken me three months to figure out what went wrong for me on that two-day experience. I was amongst a dozen women who were pretty much just like me (probably not as awesome, but lovely none the less!). We were mothers, single girls, professionals, women with hardship, women with high flying careers but mostly we were individuals in size 10, 12, 14, 16 or who-really-cares.

The problem was the women who ran the event weren’t. They were an army of highly-stylised women each one of them wearing the very-hot-right-now black capes and the same shade of fuck-off-red lipstick. I felt like I’d stepped into a goddamn Robert Palmer video.

Anyway, I chose not to review the course because, as I said, I didn’t have much nice to say about it. The point is I figured out where I went wrong in choosing to do it in the first place. While I love to surround myself with like-minded people I often make mistakes in who I look up to or go to for advice. I end up comparing myself to these highly-stylised women and just made myself feel unhappy. Like, two bottles of red wine unhappy!

I read this awesome column from the super awesome Jane Caro on the weekend that pretty much nailed it for me. Here’s a grab about when she went to an event with an inspirational speaker:

“After a largish breakfast (which most of us wolfed down), we listened to a motivational talk by an Olympic gold medal winner. She was tall, she was blonde, she was Amazonian. She was also a good speaker, damn her baby-blue eyes, and she proceeded to tell us all about the demanding and relentless training program she had followed to prepare for the Olympics. It was all about overcoming mental and physical barriers – you know the sort of thing. Anyway, as I watched this female paragon talk, I noticed what was happening to the audience. They, like me, were older, shorter, rounder and wearier than the gung-ho young woman at the microphone. Olympics? Get real! We were all simply happy to make it to the couch and a glass of vino at the end of every day without having gone insane. Far from being inspired, I watched the women wilt. This speaker was making them feel worse about themselves…”

So back to Tom Hanks on that island…I have decided to light my own damn fire! Which is actually not that hard when I apply a few basic principles:

1) I am no longer comparing myself, or my life, to anyone else’s
2) I will no longer take advice from someone about superficial things that don’t really matter.
3) I’ll surround myself with people and media that actually elevate me to be ME…just the way I am.

If you can relate to this post, and have ever felt less at a time when you thought you should feel more, then join us for lunch. This blog is turning one so the champagne will be on me. 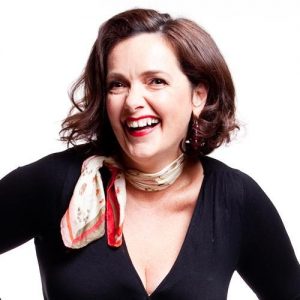 Let’s get together and lift each other up, share secrets and enjoy some fine food with the company of people just like YOU.

I am also beyond thrilled that maverick, vigilante and non-fuck giver extraordinaire Catherine Deveny will join our soiree to offer her special brand of inspiration.

Catherine Deveny is a force of nature if ever there was one!  I met Dev in 2011 at her first Gunna Writer’s Master class (and I have the coffee mug to prove it). It was a day designed for writers who aren’t writing and at the time that described me to a tee. It was love at first sight and I’ve followed her writings and stayed in contact ever since.

Dev thrills and terrifies me in equal measure. She’s a prolific writer, comedian, author, social commentator, educated, opinionated, entertaining, sassy and most importantly not afraid to be exactly who she is. She is the only person I have ever met who honestly gives zero fucks about what anyone thinks about her.

She grew up in Melbourne’s Northern suburbs as one of six kids from a very working class family (or “povo” as she calls it.) “I was the fat, noisy girl from Reservoir whose thighs rubbed together when she walked.” 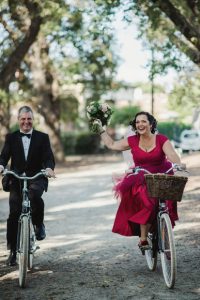 Since 1995 she’s called Coburg home where she has dubbed her place the Atheist Kibbutz. She’s a mother to three boys and is not married to her partner, Anthony who she calls Bear. They’ve been together for 32 years with a 24-year break in the middle (ask her and she’ll happily fill you in).  Dev and Anthony had a Love Party last year, which was a wedding with no God and no Government. “I was a 90 kilo, 47 year old bride in a $260 dress on a bike. No Spanx, no fake tan, no dieting, no botox, no fillers, no gifts, no seating plan, no name changing, no marriage.” Read about her special day here…it’s a joy.

She has been named in the Top 100 Most Influential Melbournians and in 2014 one of her texts was used in the HSC exam. Which is ironic given she scraped through her own HSC English exam with a score of 51%.  You might have read her columns in the Age (before they sacked her after nine years, for being too provocative). She’s a Melbourne International Comedy Festival favourite with shows that regularly sell out. She’s appeared on Channel Seven’s Tonight Live with Steve Vizard, Full Frontal, ABC TV’s Good News Week, BackBerner and Q and A (you know …that scary show on ABC where smart people debate important things and we mere mortals struggle to keep up?), Network 10’s Rove Live, The Wedge and skitHOUSE and The Project. She performs regularly on radio and television around Australia and was a popular fill in broadcaster on 774 ABC Melbourne. In August 2012 she appeared in the Emmy award winning Go Back To Where You Came From on SBS television with Angry Anderson and Peter Reith. It was also in 2012 when Cardinal Pell threatened to sue her over a tweet.

You can find out more about her at her website where there are links to her words and TV appearances and all sorts of fun stuff – highly recommend!  http://www.catherinedeveny.com/ 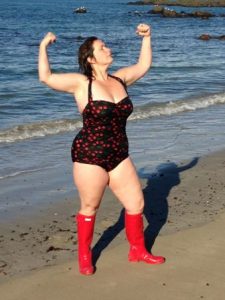 The reason I want her to have lunch with us is because she is the antithesis of every fucking cookie cutter inspirational role model that we get exposed to in the media when we embark on a weight loss or wellness program. Dev leads an incredibly active lifestyle. She cycles everywhere (including to her own wedding!), she’ll probably turn up to lunch with her bike helmet still on. She regularly runs 10 kilometres and is responsible for introducing me to Enell (bras for big boobs, look ‘em up ladies!). Good food and a healthy attitude are also cornerstones of her vibrancy. Basically she inspires the fuck out of me and I want you to meet her.

I also have no idea what she’ll say because she won’t take a brief…so I’m living on the edge. Want to join me? CLICK DEV’S GUMBOOTS FOR TIX

5 thoughts on “Light Your Own Damn Fire”