The “Pretty-Much-Annual Cowen date night” – a night where mummy and daddy get to adult for a few hours with cocktails and canapés (my favourite kind of dinner, if I’m honest) comes around infrequently (as the name suggests). Much to my husband’s disappointment I often suggest a stage show…and because I organise it all…we usually go to a stage show. The last stage show we went to was one I’d wanted to see for about five years. And one I secretly hoped would transport me back to the 80s when I was a teenager and life was simpler and there was more rock and roll and no Justin Bieber and no Facebook status.

I’ve always been a tragic nostalgic. I’ve been reminiscing since I was 16, which is clearly decades before I had anything to actually reminisce about. Anyway, I chose to see this show because it promised to take me back to 1984. In a decade where I was going to grow up and marry Simon LeBon. When I was happy, angry, frustrated and liberated all at the same time. Teenage angst anyone?

What I really wanted. What I really, really wanted was to be at a concert with the real deal. Where I knew all the words to all the songs and the man behind the microphone was going to live forever. Except he didn’t. And neither did my teenage years.

If you’re a child of the 70s or 80s there’s a good chance that Queen, David Bowie and various new romantics shaped your music taste (unless of course you were punk, then that’s a whole other Sid and Nancy kind of conversation).

I sat through two and a half hours of the very witty, often funny and terribly cheesy Ben Elton’s We Will Rock You, with a talented cast who, for the most part, had pretty good stage presence as they sang their way through a handful of Queen’s back catalogue.

Sure, it was entertaining and I was comfortably numb with more than a few glasses of Shiraz and post dinner cocktails, but it didn’t satisfy me. Not by a long shot. Honestly, all it did was make me crave the real thing. Which made me sad because I can’t have that anymore. The unique and divine Freddie Mercury is gone. And this stage show, while trying to emulate the music he created with Bryan May, just reminded me of that.

So while I was wandering down Morose Avenue I realized that what I seek these days is authenticity. I don’t want no tribute bands. I don’t want no copycats. I want the real thing. Like those Coca-Cola ads of the 70s, where choirs of happy people toast to the real thing – Coke – as opposed to any other market imitation of their fizzy pop.

When I was holidaying in Phuket last month my cravings for the ‘real thing’ intensified. I’d booked a fabulous all-expenses-and-minimal-effort paid trip with a bunch of sensational women. All of whom had the same desire as me to escape their humdrum and recharge the mummy batteries. (You can read about it here, here and here.) It was a great trip and I was lucky to be able to take it (alone) but if I’m honest (and why not, this is my blog, so fuck it!)…it just wasn’t the real deal. I came to the sudden realisation that me and hotels are uncomfortable bedfellows. I’d spent the better part of a day travelling 7,000 kilometres on a quest for peace and tranquility and, on my first morning, realised I’d walked right into the cacophony that is hotel resort life.

On my first morning I opened my balcony doors hoping for a peaceful birdsong and was greeted with lightweight covers of David Bowie, Macy Gray and other recognisable songs covered by unrecognisable session musicians for the purpose of torturing fans of the real thing. The music was coming from the hotel restaurant which my room happened to overlook (lucky me) as they were setting up for service. So that music was ably backed by a choir of clanging plates and clinking glasses…and the local call to prayer (which I kinda like). Now, I don’t mind covers and I know that someone has to have the room near the restaurant and that the restaurant has to set up so we can indulge in the all-you-can-eat-buffet …but at 5am on my first day in ‘paradise’ I was in no fit state to cope or reason with the holiday cards that I was dealt. 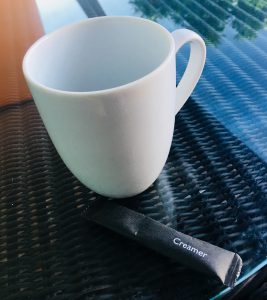 So I closed my balcony door and went to boil the kettle and make a cup of tea…and that’s when I fell apart. There was no milk. Just powdered creamer. I quite literally started to weep over non-existent spilt milk. It was all too much. I was travel weary, craving peace and quiet and a brew of my own making with no interruptions that I’d get to drink while it was still hot and…I just couldn’t have it. Sure I could have called room service but honestly I just didn’t want to deal with anyone or anything while I had my wee meltdown over imitations.

So the moral of my story is that the simple things in life are often the most authentic …and so very easily found close to home.  I don’t want a soundtrack of imitations. Or creamer for my tea. I want the real thing. I want a quiet cup of tea. At home. When everyone else is on holiday!

(oh and I want Freddie Mercury and George Michael back amongst us…ok? thanks. bye)

One thought on “The Real Thing”