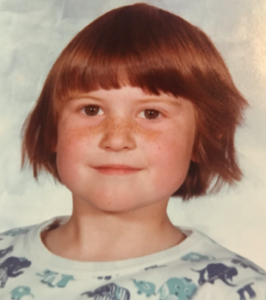 When I was a child all I wanted was long hair. Unfortunately all my mother wanted was to save on hairdresser bills and cut my hair (and my sisters) herself. The result was the classic 1977 bowl cut. Exhibit A, your honour (pic at right).

After bath time my sister and I used to pretend to have long hair by wrapping a towel around our head and swishing it to and fro as if we had a mane. I would also lust after those synthetic flaxen locks on the heads of our Barbies…and on more then one occasion hacked into their long hair out of spite. I wasn’t yet old enough to realise that Barbie’s skinny waist, tippy toe long legs and pert boobs were also a synthetic I could never achieve.

I lived with bowl cuts until about 1982 when, after a particularly brutal cut, no doubt inspired by the latest nit infestation at school, I refused to let it be cut anymore. Not even the fringe. I was 10 goddamn it and I wanted long hair. When mum finally acquiesced and agreed to let us grow our hair the result was…ummm…hair. I was reluctant to go near a hairdresser in case they chopped it back to the bowl. So it just grew and grew and grew.

My daughter was bald for the first two years of her life and she was adorable. But as soon as she had anything a clip would cling to she wanted hair. Now, at four, I don’t want to cut it because I don’t want her faced with the same croppy chop I had at her age.

Hair Crimes Through the Ages

I was reminded of all this childhood hair angst when I saw a Facebook post from a former colleague whose 11-year-old daughter has been growing her hair for 3.5 years. THREE AND A HALF YEARS?! That’s a long bloody time in kid land. Sophia has been on mission. Not unlike my mission to never see the inside of a hair salon, except that Sophia’s motives are a tad more admirable.

She’s donating her hair to kids who might want it.

Alopecia Areata is a condition where hair is lost from some or all areas of the body. It often results in a few random bald spots and can be temporary or permanent. There is no cure.

When Sophie heard about Alopecia Areata she decided that she wanted to donate her hair to the Australia Alopecia Areata Foundation Inc (AAAF). All hair donated to AAAF is sent wig makers who specialize in making hairpieces for medical purposes. They also run the Wigs For Kids program, which provides financial grants to help families with the costs of wigs.

Sophia has gorgeous thick, long hair and has been waiting for it to be long enough so she can still do a ballet bun when she cuts the bulk of it off. Smart kid!

Her haircut is booked for 2 days before Christmas and she’s raising funds for the cause. What a little legend.

I loved her mission so much that I wanted to tell you all about it. If you had ‘mum cuts’ back in the day perhaps consider throwing a few dollars in Sophie’s Go Fund Me kitty.

You can do that here: https://aaafhairdonation.gofundraise.com.au/page/MegumiMiki

…and while you’re at it show us your bowl cut. I’ve shown you mine, now you show me yours 😉